Whiteout Solutions is a geospatial technology company based in Northern Vermont. Whiteout Solutions has been developing remote sensing hardware and software systems that specialize in high precision Light Detection and Ranging (LiDAR) technologies since 2016. Whiteout Solutions has two core areas of business: a) service bureau that provides survey grade geospatial data collection and processing services with a focus on LiDAR and photogrammetric data; and, b) GeoSAP an automated geospatial workflow and processing application. Whiteout Solutions remote sensed LiDAR data collections are high resolution with spatial accuracies in the >2cm range. These data accuracies are attained with low-flying (400’), unmanned aerial systems (UAS) coupled with best in class LiDAR Sensors. The difference between “survey grade” LiDAR derived data products (E.g., DEM or DTM) and the nationally available LiDAR derived datasets that have recently been made available through USGS cannot be overstated when organizations use the data for expensive and highly sensitive project development. The USGS data supported programming and served up to statewide programs such as Vermont’s VCGI data portal is frequently a basis for organizations understanding of LiDAR data. And although there is absolutely a need for lesser quality LiDAR derived products, it is important to understand differences in quality and the implementations that require higher quality.

Purpose: With this assessment we aim to validate and showcase the high accuracy and usability of Whiteout Solutions remote sensing data collection systems for certain implementations. Additionally, this document highlights differences between UAS LiDAR and traditional airborne fixed wing LiDAR data as was used for the nationally available datasets. As such, this document compares both collection methods, highlighting derived data product accuracy and resolution.

Problem: Depending on the implementation of the survey data, the accuracy can drastically affect the results of the LiDAR derived data products (e.g., DTM, DEM, DSM, slope, contours, etc.). Properly collected and processed LiDAR and Ortho-Imagery data can provide extremely high-resolution results, achieving precision levels within 2-4 centimeters. However, quantifying and validating these accuracy levels can be technically difficult and a challenge to convey. We will describe in this document our approach to collecting data, the technology, and the resulting accuracy levels. These accuracies will be evaluated by using ground control survey points as benchmarks to calculate the offsets for the accuracy assessment.

Approach: Whiteout Solutions set out to validate the accuracy of its data by selecting an area of interest (AOI) that contained several features that would be found in a typical planning or engineering project which would require survey grade accuracy. In this case, we selected an urban AOI for building footprints and other modeling. This area included many structures, building, roads, vehicles, vegetation, and utilities assets. The area of interest is a 430,000 ft2 section of downtown St. Johnsbury, VT.

Ground Control Points (GCPs) were placed at the four corners of the area of interest with two placed within middle sections. The coordinates were collected and recorded simultaneously using a Sokkia GCX2 Multiband GNSS Receiver over a period of 130 epochs. This survey grade GNSS Receiver offers millimeter level accuracy on X, Y and Z axis and is used to connect into state’s Continuously Operating Reference Stations (CORS) network for real-time positional corrections.

Aircraft assembly and initialization took approximately 5 minutes. This includes compass and IMU calibration. While the aircraft was warming up, the sensor was installed and allowed time to achieve GPS lock.

The mission was completed using the DJI Matrice 600 Pro which features triple-redundant GPS modules to ensure the highest-level positioning when flying predetermined routes, necessary for LiDAR flights where accuracy is the focus. The Matrice 600 Pro utilizes the A3 flight controller which has 3 redundant IMU’s to ensure stable flight and uses six intelligent batteries with single-battery-failure failsafe system. The flight plan was created using DJI’s Ground Station Pro.

The flight took 12 minutes from take-off to landing. The aircraft flew at 5 MPH to achieve a high point density per Sq meter for the LiDAR collection. The total collection time from setup to landing took roughly 20 minutes.

Below is the route flown for this mission: 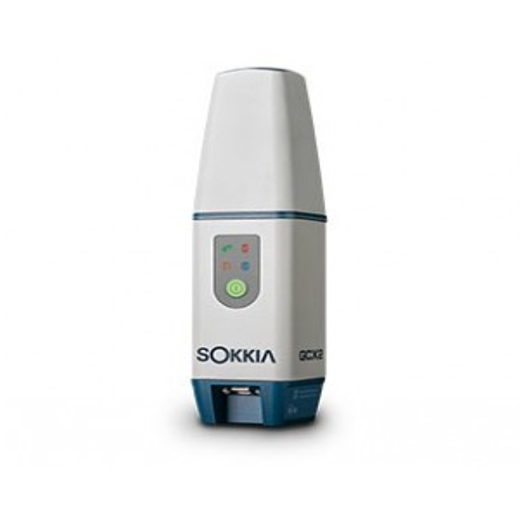 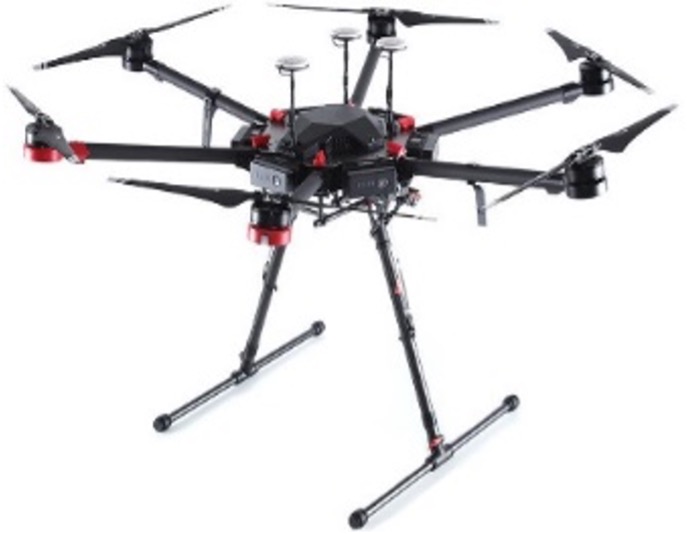 The Digital Surface Model (DSM) above was generated by LiDAR derived collection conducted by Whiteout Solutions. This collection was highly accurate to <2cm level and is considered survey grade.

Accuracy of LiDAR data sets are determined by their Root Mean Square Error (RMSE), as prescribed by American Society for Photogrammetry and Remote Sensing (ASPRS). RMSE is the square root of the average of the set of squared differences between data set coordinate values and coordinate values from an independent source of higher accuracy for identical points. This tells you the difference between the coordinates of your point cloud to real-earth coordinates. 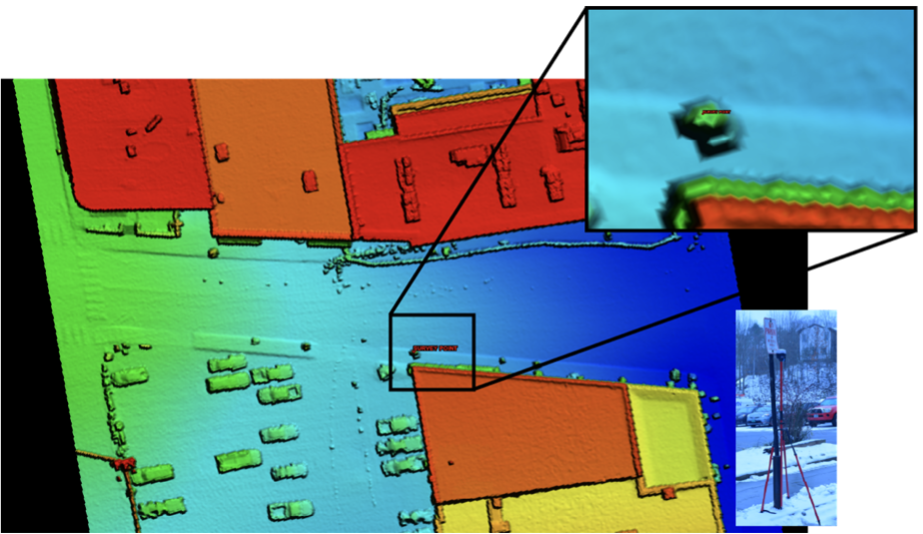 The Whiteout Solutions data collected for this accuracy assessment has an RMSE of 1.09 cm. This is a highly accurate model with very little error introduced. Below is an image of the digital surface model generated from the LiDAR point cloud data. The surface model clearly picked up the no parking sign visualized in the picture. The small red point in the image shows the RTK’d GPS position we manually recorded with a survey grade GPS unit connected to the VT CORS network for error correction. The GPS point and the surface model fall exactly inline and represent the accuracy and tight tolerances that the data represents.

The resolution of our deliverables is easiest described by a side-by-side comparison of our UAV LiDAR based collection VS a traditional fixed wing LiDAR collected dataset. As is clear in the  below images, the resolution and clarity of Whiteout Solution’s surface model is an extremely high-quality deliverable. Having the high-quality resolution models will enable very accurate analysis and feature extractions that are geospatially accurate and absolute. 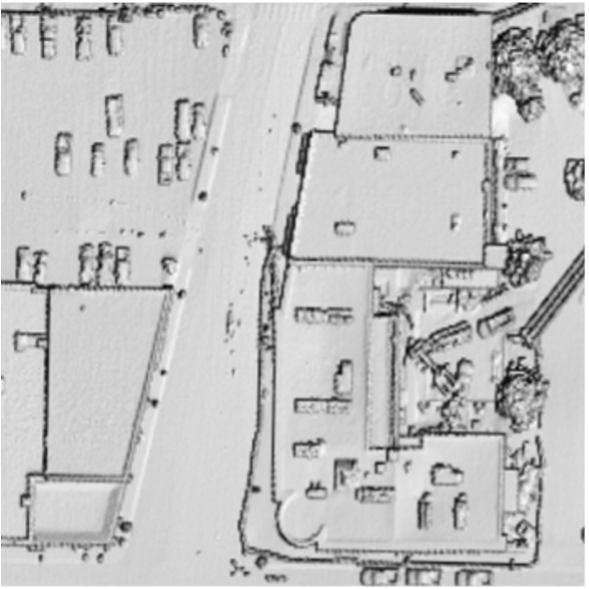 Whiteout Solutions aerial LiDAR (UAS) and remote sensing collection process provides highly accurate data sets that can be used in a wide array of industries and projects. Environmental projects such as: coastal erosion assessment, wetlands, watershed or run off assessment; recreation development projects such as: trail planning, tracking snow depths for ski resorts or avalanche prediction, and infrastructure and transportation mapping project such as roads, bridges, telecom infrastructure, etc. all require high accuracy. The analysis reported in this document proves that in these fine detail projects, Whiteout Solutions can consistently reach a >2cm of vertical accuracy requirement.

If your organization needs survey grade aerial or terrestrial data collection services, contact Whiteout Solutions to learn more about how we can assist you in collection and processing.